You will hear a recorded passage. After that you will hear five questions. Both the passage and the questions will be read twice. When you hear a question, you should complete the answer to it with a word or a short phrase (in no more than three words). The questions and incomplete answers are printed in the textbook for your reference.

1     As I think about who might be my role model, I realize that there are a lot of people I know personally that I could look to for inspiration.But I am sharing these thoughts with others who most likely do not know my friend or my sister-in-law or the girl I work with. Therefore I think I should write about someone famous. But, it seems that these days there are not a lot of good role models to choose from, at least not from the “typical” choices that we usually think of as role models.
2     There are some standards that my role model must have. First, she must be close to my age. She has to have overcome some difficulties;in other words, she did not have her “celebrity” status handed to her. Finally, she must be helping others.
3     I believe that someone who fits those standards quite well is Oprah Winfrey.
4     Oprah Winfrey’s life had a very difficult beginning. She was born in 1954 to a poor, unmarried black girl. For a while, Oprah was raised by her grandmother, after her mother moved north. She later went to live with her father in Nashville, after having survived physical abuse and the birth and death of a baby of her own.
5     Oprah’s rise to fame began with her hosting morning talk shows, such as A. M. Chicago. She became so popular that in 1986 she started The Oprah Winfrey Show.Then Oprah began her own company and controlled The Oprah Winfrey Show.
6     In 1994, Oprah did something for which she gained my respect. She decided to break away from the style of other daytime talk shows and promised that her show would be free from sensational but meaningless topics. Her viewers responded positively, and her popularity went up.The Oprah Winfrey Show was centered on meaningful subjects, many of which were aimed towards women.
7     Oprah has used her popularity to start many meaningful projects. She started Oprah’s Book Club in 1996, intending to get the country excited about literature again.Oprah’s Angel Network was started in 1997, encouraging people to open their hearts to those in need.This includes a project to collect small change to send students to college.
8     Oprah has been able to share her good luck with others while keeping her promise to focus “The Oprah Winfrey Show” on subjects that will encourage her viewers.Each week her shows covered such topics as spirituality, fitness, relationships, steps towards financial freedom and more.
9     Winfrey’s talent for public performance and quick response in answering questions helped her win fame. Winfrey Talk Show had an estimated audience of 14 million daily in the U.S. She is also a successful actress and won an Academy Award nomination for her role in The Color Purple.
10     I admire Oprah because she seems to be “just a regular girl.” Once, I went to a lecture given by one of Oprah’s favorite authors. As we were sitting before the lecture began, a couple of black women walked in. My friend said, “Oh look, there’s Oprah.” I said, “No, it’s not.” She said, “Yes, it is.” Well, as it turns out, it was Oprah. She looked just like the rest of us. When the speaker introduced her, she was almost embarrassed to stand.
11     I feel Oprah is a really nice person, someone who would be a great girl friend. She knows where she is going. She has made a name for herself and knows the importance of sharing her good luck.

First, she must be close to the author’s age. Second, have overcome some difficulties. Finally, she must be helping others.

The author means that her role model should not have her “celebrity” status handed to her.

3.What was the first show that made Oprah Winfrey famous?

Oprah’s rise to fame began with her hosting morning talk shows, such as A.M. Chicago.

The Oprah Winfrey Show was centered on meaningful subjects, many of which are aimed towards women.

The author thinks that Oprah Winfrey is a really nice person, someone who would be a great girl friend. She knows where she is going.

Choose the best answer for each of the following statements or questions according to the text.
What kind of people might become a role model for the writer?
Ordinary people like her sister-in-law might be her role model.
Only famous people like Oprah Winfrey could be her role model.
A lot of famous people could be her role model.
There are not any good role model among the people she knows personally.
The writer chooses to write about Oprah Winfrey as her role model because ________.
Oprah was born with a celebrity status
Oprah is much more mature than the writer
Oprah has been helping others
Oprah is beautiful and talented
What did Oprah Winfrey do with her talk show that gained the writer’s respect?
She decided to break away from daytime talk shows.
Her talk show focused on meaningful topics.
Her talk show was centered on sensational topics aimed towards women.
The popularity of her talk show went up.
Which of the following was not started by Oprah Winfrey?
A.M. Chicago
Oprah’s Angel Network
Oprah’s Book Club
The Academy Award
What impressed the writer most at a lecture given by one of Oprah Winfrey’s favorite authors?
Oprah looked very beautiful.
Oprah was almost embarrassed.
Oprah appeared to be very ordinary.
Oprah showed great talent for public performance. 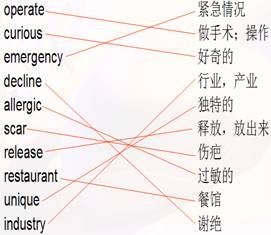 I did not tell this to anybody. / I told this to nobody.

I don’t understand all the sentences in this paragraph.

Choose the best answer to complete each of the following sentences.

This was because Nancy Gruver believed that the best way for girl to learn about themselves and their dreams would be to explore the issues for themselves.

Angela Davis is a well-known scholar and equal-rights activist.

One of the major benefits of having a role model is that you can look at how he or she deals with everyday situations and ask yourself what you would do.

Ryan admires Socrates because Socrates stoop up for his own beliefs and tried to live his own life.

According to the author,role models can be parents, teachers, or anyone you admire.

Judge whether each of the following statements is true or false. Write T if it is true, or F if false.

T  3. Christopher Reeve is an actor who played Superman in the movies.

F  4.  Role models cannot influence how much confidence you have.

Choose the best answer to complete each of the following sentences.

Fill in the blanks with the words given below.

What’s the difference between a role model and a mentor? Role models are those you admire but don’t necessarily know personally. Mentors, on the other hand, are people you get to know. You can write or call a mentor to get advice when you need it, so mentors can play a major, active role in your life.

Once you meet a potential mentor, ask lots of questions to find out what makes that person who he or she is. What did it take to get where he or she is today? What challenges does the person face andhow does he or she deal with them? What lessons has the person learned? Most people are happy to share their experiences; in fact, most people who are mentors had mentors themselves. So they know that having a mentor can change your life.

Translate the following sentences into English using the words or phrases given.

We young people should all have our own role models.

This scientist set a good example for us with his hard work and many accomplishments.

To finish this task, you must do it step by step.

The lecturer shared his experience with his audience.

Her success is a great inspiration to me.

Translate the following sentences into Chinese.

The host and hostess are Mr. and Mrs. Ming Cai .

The invited guests are Mr. and Mrs. Ted Woods .

The reception will take place at sixp.m., on Tuesday , the First of October.

The reception will be in the Park Hotel .